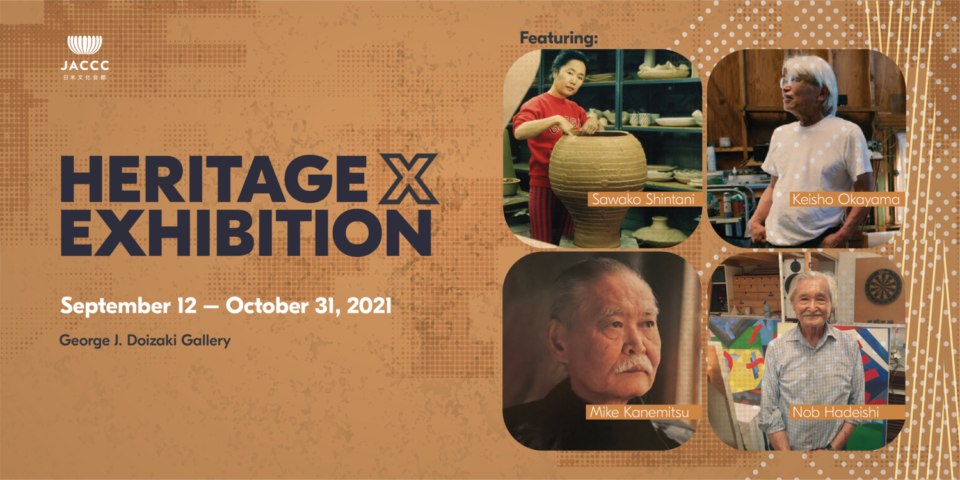 Funded in part by the generosity of the Department of Cultural Affairs (DCA), City of Los Angeles.

While all four artists might be said to be broadly under the post-war abstract expressionist umbrella in different ways and at different times, Kanemitsu’s painting style is directly associated with New York abstract expressionism. Hadeishi’s work was influenced by both the 60's New York and Los Angeles art scenes. Okayama’s work, ranging from color fields to figurative, tends to echo the movement’s interest in the spiritual and unconscious. Shintani’s sculptural work in bronze, cement, and clay also reflects the innovative, non-utilitarian spirit that emerged in California's ceramics community. 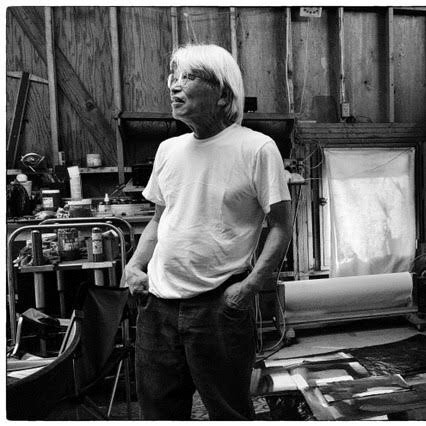 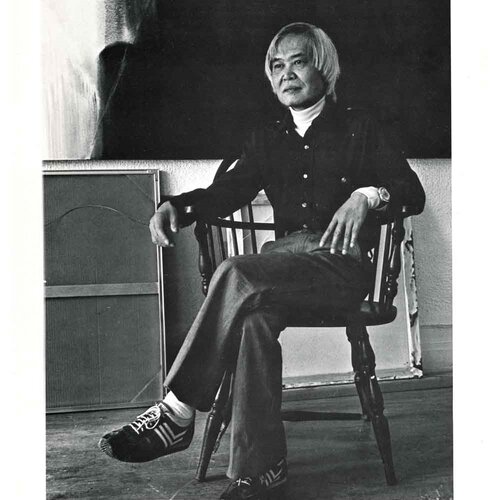 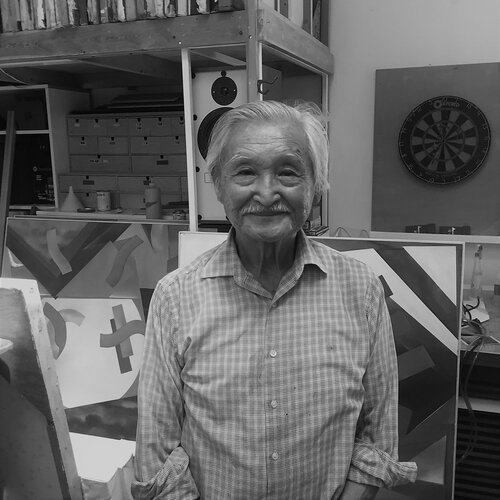 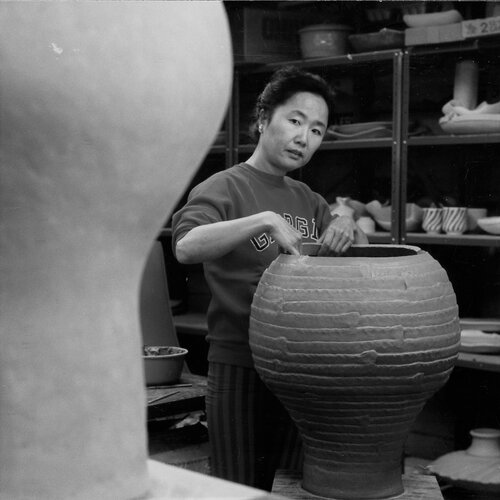 “My primary concern has always been to establish a condition of feeling with forms in space that felt to me to be true. The images must feel real to me.”
— Keisho Okayama, 1991
A certain sense of color and space was consistent in all Okayama’s work. His later works distilled and concentrated this, creating a kind of mystical light.

Keisho Okayama was born April 23, 1934 in Fujiidera-shi, Osaka, Japan, the middle son of Reverend Zenkai Okayama, a Jodo Shinshu Buddhist priest, and Tatsuko (Hattori) Okayama. In 1936, his father brought the family to the United States to serve a congregation in Watsonville, California.

After the outbreak of war between the US and Japan, the Okayama family was first forcibly evacuated to Tanforan Racetrack in San Bruno, then to Topaz War Relocation Center, an internment camp in central Utah.

Internment had a deep and enduring effect on Okayama that resonated throughout his life. Prejudice against Japanese Americans remained strong for many years after the end of WWII. Because of this, he felt alienated from the country of his birth, and experienced confusion and guilt about his sense of obligation to its culture. His split identity as a Japanese American created enormous psychic stress. Art was one way that Okayama dealt with these feelings.

Okayama studied art at UCLA, where he received a BA in Art in 1962, and took figuredrawing classes at Los Angeles City College. He met Lauren Fisher in 1967, when she modeled for an art class. At the time she was an art student at UCLA and modeled for parttime income. They were married in 1969.

Between 1971-1995, Okayama was an adjunct professor at the College of Creative Studies at UCSB, East Los Angeles Community College and UCLA. He was a sensitive and charismatic teacher who maintained friendships with many former students.

For over 20 years, beginning in the early 1970s, Okayama was involved with the Senshin Buddhist Temple Kinnara Gagaku group. He played the hichiriki (a double reed Japanese flute), crafted his own instrument, and also designed and crafted cases for hichiriki, sho, and bugaku masks.

Okayama was prolific, painting and drawing throughout his life, producing work in pencil,sumi, watercolor, charcoal, oil pastel, and acrylic paint. Around 1980, instead of using stretcher bars, he began pinning the canvas to the wall. He preferred painting on canvas that was not framed and stretched because he felt the material itself, and the way it draped on the wall, was an important element of the overall feeling. A certain sense of color and space was consistent in all his work. His later works distilled and concentrated this, creating a kind of mystical light.

He previously exhibited in JACCC’s George J. Doizaki gallery in 1982 with Hirokazu Kosaka, in 1987 with Richard Yokomi, and a solo exhibit in 1990.

Kanemitsu developed a style that integrated his training in Japanese sumi-e painting with modernist abstraction.

Matsumi “Mike” Kanemitsu was born May 28, 1922 in Ogden, Utah. From age three to 16, his grandparents raised him in Hiroshima. He then attended school briefly in Utah before working on the railroad and copper mines in Nevada. In 1938, he went to Japan to finish high school, but returned to the United States to avoid being drafted. In Los Angeles, he found work as a gardener before enlisting in the US Army.

Following the attack on Pearl Harbor, he was detained in army camps in the Midwest while still on active military service, where he served as a medic, drew portraits, and decorated the officers’ clubs. He eventually volunteered for the 44nd Regimental Combat Team for overseas service and was stationed in France as a hospital assistant. There, Kanemitsu met other artists and intellectuals who introduced him to modernist art and encouraged him to pursue formal art studies.

In 1946, with the support of the GI Bill, Kanemitsu undertook formal art education with Karl Metzler in Baltimore, Fernand Léger in Paris, and Yasuo Kuniyoshi at the Art Students League of New York beginning in 1951.

While at the Art Students League he associated with artists such as Paul Jenkins, Warren Brandt, Jackson Pollock, Lee Krasner, Robert Motherwell, Willem and Elaine de Kooning, and others. Kanemitsu developed a style that integrated his training in Japanese sumi-e painting with modernist abstraction.

After a decade in New York, he came to Los Angeles in 1961 at the invitation of June Wayne at the Tamarind Lithography Workshop. His loose painting style translated beautifully onto the litho stone and he discovered a great love of printmaking.

Kanemitsu was on the faculty of Chouinard Art Institute, California Institute of the Arts, and Otis College of Art and Design. In 1964, he visited Japan and established connections with the avant-garde Gutai Group and Bokujin Group.

In 1990, along with fellow artist Nancy Uyemura and two dealers from Japan, he opened Gallery IV, which showed both local Los Angeles artists and Japanese artists. Kanemitsu died at his home in Los Angeles on May 11, 1992. His work continues to be shown in both the US and Japan.

Hadeishi’s work was influenced by both the 60's New York and Los Angeles art scenes.

Nobuyuki Hadeishi was born July 15, 1936 in Itsukaichicho, Saiki-gun, Hiroshima, Japan to Tamotsu Hadeishi and Fusaye Hadeishi. Both parents were US citizens born in Hawaii but went to Japan as children, later returning to the US in 1936. When World War II broke out, Nob and his older brother Tetsuo were separated from their parents, who were interned at Tule Lake, until they could move to the US in June 1947.

In Los Angeles, he lived on East 5th Street and attended Amalia Street Elementary. At 15, he was introduced to Chouinard Art Institute (later CalArts) by a junior high friend and fellow track runner. He studied at Chouinard while still a high school student at Dorsey, taking night and Saturday classes. “I told them I was 18 which was the minimum age required to study figure drawing classes there. And the lady that was collecting the fee wasn’t all that particular and never required ID.”

He served in the Air Force between 1953-1958, and after being discharged, enrolled full-time at Chouinard where he met Mike Kanemitsu and Sawako Shintani.

Hadeishi graduated from 1961 and received the Brooklyn Museum Art School’s Max Beckmann Memorial Fellowship, driving across the country with his wife Irene in an Austin-Healy Sprite sports car “which somehow made it across the Rockies at maybe 20 mph.” They arrived in New York City, at the time an epicenter of abstract expressionism, and through the support of Mike Kanemitsu, associated with many of its figures through the Cedar Street Tavern, where artists met after hours.

After the Brooklyn Museum Art School, Mike Kanemitsu let Hadeishi and his wife stay in his New York storefront for $117.00 per month, “a wonderful place which had been a barbershop though apparently the previous tenant had made bootlegged booze of some kind according to the way the bathtub looked.” He received the Brevoort-Eickemeyer Fellowship from Columbia University’s School of the Arts, where he graduated with an MFA in 1964.

After completing a Fulbright Research Fellowship at Tokyo University of the Arts in 1966, he joined Chouinard Art Institute as faculty (1966-1972) and then Hobart and William Smith Colleges (1972-75). He retired from teaching in 1975.

Though Shintani also produced many utilitarian ceramic pieces such as plates, bowls, and hashioki, the ceramics on display [in the Doizaki Gallery] were chosen from a large collection at her home in Highland Park, with an eye toward unique, hand-built sculptural pieces.

She then studied sculpture and ceramics at the Chouinard Art School (1966-1968), now the California Institute of Fine Arts (CalArts), where she met Mike Kanemitsu, Nob Hadeishi, Juanita Jimenez, Ralph Bacerra, Mineo Mizuno, Jun Kanekoo, and Hirokazu Kosaka. She settled in Los Angeles in 1970.

Though Shintani focused on ceramics in later years, she also sculpted in wood, concrete, and bronze, including several public commissions. “Harmony” (1985) is a large bronze bas-relief depicting a group of abstract figures, formerly located at 332 East 2nd Street and currently at Weller Court. Shintani derived the composition of Harmony from an earlier series, “Mother and Child.” Her proposal was selected by the Community Redevelopment Agency and the owners of the market over other submissions, in part, because it combines modern and traditional elements.

After being told where her work was to be installed in the original location, Shintani worked with architectural drawings to determine the size and scale of her piece. She finalized her design in consultation with the owners before preparing a 1/5 scale plaster model of the work. Shintani then made a full-size clay model for use in the bronze casting. “Harmony” was cast by the sand-cast method in three sections at a foundry in Japan. Finally, Shintani added texture to the surface of the work before shipping it to Los Angeles for installation.

In 1989, she completed a ceramic sculpture, “Aji,” for the exterior of the Sambi of Tokyo restaurant on Firestone Boulevard in Downey. She also has public art in Japan, including several bronze and concrete sculptures in Kobe.

She exhibited throughout California as well as in Japan, including group shows, and solo shows at Los Angeles’ Q Gallery and KCC Gallery in Kobe. Shintani received many awards including the Minister of Education’s Award at the All-Japan Exhibition of Selected Prefectural Representatives in Tokyo, Yomiuri Television Award at the Kansai Art Show in Osaka, and the Mile High Ceramics Award of the North American Sculpture Exhibition in Golden, Colorado.

Though Shintani also produced many utilitarian ceramic pieces such as plates, bowls, and hashioki, the ceramics on display here were chosen from a large collection at her home in Highland Park, with an eye toward unique, hand-built sculptural pieces.

This exhibit is available to view in-person from September 12 to October 31, 2021, no reservations necessary! Please note the hours of operation below, as well as additional guidelines to help keep our visitors safe. 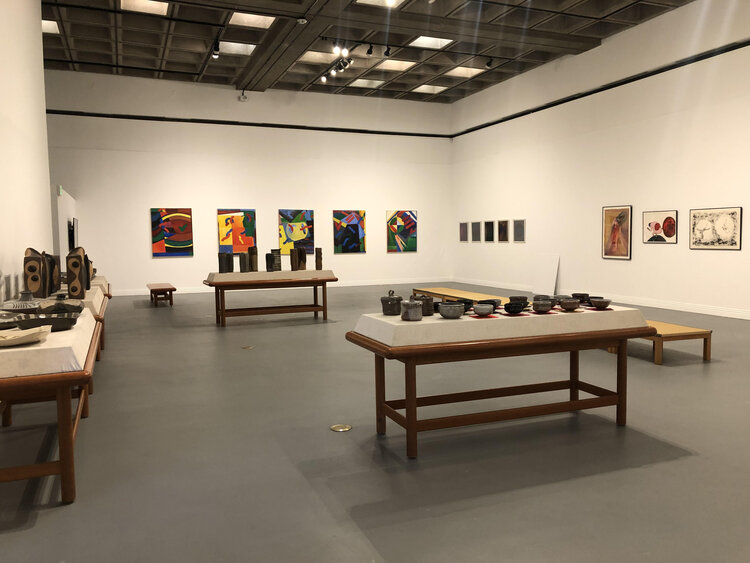