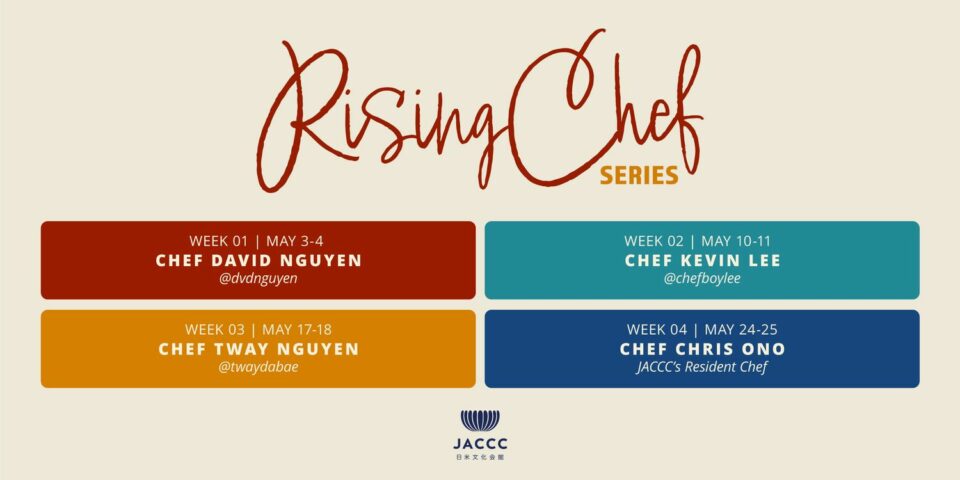 “This is an incredibly exciting moment for JACCC, as we open our doors to the Toshizo Watanabe Culinary Center for such a joyous celebration of food, innovation, and community,” says Jane Matsumoto, JACCC’s Culinary Cultural Arts Program Director. “We hope for our entire community to come out as we bring the culinary ambitions of Chefs David, Kevin, Tway, and Chris to life!”

Week 1 of the series will feature a restaurant concept by David Nguyen, a French Laundry and Club 33 trained chef and first-generation Vietnamese American born in Palawan, Philippines. Chef David Nguyen’s menu features flavors from his childhood in Vietnam and his upbringing in the US.

Week 2 will feature a restaurant concept by Kevin Lee, a trained Korean American chef who specializes in French and Italian cuisine, with prior experiences at several Michelin-star restaurants. Chef Lee’s menu reflects his formal training in Italian and French cuisine, seasoned with flavors from his Korean roots.

Week 3 will feature a restaurant concept by Tway Nguyen, a Vietnamese born chef and one of the fastest rising stars in the culinary space. Whether it's at her sold out pop-ups across the US or on her hit People Magazine series "Celeb Eats", her goal is to connect with people through food. Chef Tway Nguyen’s menu is an ode to traditional Vietnamese comfort foods, elevated through innovative flavors and pairings.

All proceeds from the event will be donated to fund culinary innovation and entrepreneurship,  including support for TWCCC’s Culinary Arts Program, which empowers aspiring chefs with a space to share their stories, techniques, and innovations.

Tickets for the pop-up–open Tuesday and Wednesday for the month of May–will be available for purchase at bit.ly/risingchefseries for $180 starting April 21, 2022 at 10am PST.

Founded in 1971, Japanese American Cultural & Community Center is one of the largest ethnic arts and cultural centers of its kind in the United States. The Japanese American Cultural & Community Center weaves Japanese and Japanese American arts and culture into the fabric of our communities. JACCC remains firmly rooted in Little Tokyo, providing a vital place to build connections between people and cultures, locally and internationally. Through inclusive programs and authentic experiences, we continue our traditions and nurture the next generation of innovative artists, culture-bearers, and thinkers. For more information, please visit JACCC.org.